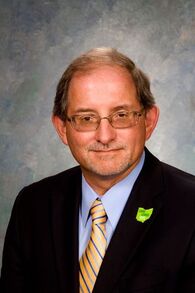 The Ohio Osteopathic Association has adopted the new theme of "Let's PULL Together."  It was coined by OOA Past President Robert W. Hostoffer, Jr., DO, of Cleveland, based on his many years of crew rowing experience.  But it's also relevant for the OOA and the entire osteopathic profession since the acronym stands for Pride, Unity, Loyalty, and Legacy.

"The Ohio Osteopathic Association is excited to nominate Dr. Hostoffer as a candidate for the American Osteopathic Association's Board of Trustees," said OOA President Sean D. Stiltner, DO.  "His vision and experiences as a state and national leader makes him uniquely qualified to help lead the profession forward."

Dr. Hostoffer attributes his leadership skills and team building abilities to his passion for rowing. He tells about a time when he was rowing on the Cuyahoga River, a few years ago, as part of a four-man team. The  crew encountered a storm. As the storm rolled in, blowing sand from the cement piles rendered the four men sightless. According to Hostoffer, they got back to the shore by trusting "the voice of our cox," hearing the rhythm of the oars hitting the oarlocks in synchronicity, and knowing if they listened to each other and changed hearing into action, they would get back to the dock safely.

"As a rower, I know how important it is for our oars to go into the water together and come out together in order for the boat to remain balanced and move forward. Our relevancy depends on the entire osteopathic family to PULL together like we have never done before.

"In the late 1800s, 13 DOs pulled together to form the Ohio Osteopathic Association. Little did they know that from their efforts would grow an association comprised of hospitals, interns, residents and a medical school in Ohio with three campuses in Athens, Dublin and Cleveland. OOA must continue to nurture the seed planted by its forefathers; it must be moved by its members.

"Together we can make a relevant change waving the banner of our osteopathic profession, and we can strengthen its foundation and lead the transformation of health care in Ohio and the nation. It is time. It is our time. Let's PULL together."

OOA Nominates Robert W. Hostoffer, Jr., DO, for the American Osteopathic Association's Board of Trustees

He is passionate about scholarly research and has donated a video series, entitled "Scholar 7" to help osteopathic physicians and graduate medical education programs  adopt and promote scholarly work as an essential part of their practices and training programs. The recipient of many awards, Hostoffer was given honorary fellow status in the American College of Osteopathic Internists and was named Pediatrician of the Year by the American College of Osteopathic Pediatricians.

In addition to leading the profession, Dr. Hostoffer, a rower since high school, captains a four-man boat and has won gold and silver medals in several regattas in the Cleveland area.

Watch Dr. Hostoffer's ideas behind PULL and the team-building focus of rowing come to life in this video: