Terry Johnson, DO, Expected to be Appointed to Ohio Senate 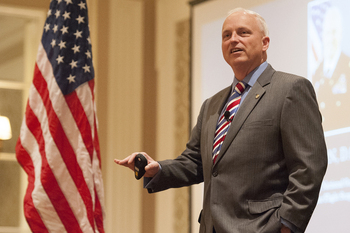 Johnson, DO, of Scioto County, to fill the vacancy in Ohio’s 14th State Senate District, which includes Adams, Brown, Clermont and Scioto counties and part of Lawrence county. The seat was vacated last month when former State Senator Joe Uecker resigned to take a position with the Ohio Department of Transportation.

A screening committee of Republican senators met this week with six applicants for the open seat and recommended Johnson to serve the remainder of the current term. A lifelong resident of southern Ohio, Johnson is a practicing osteopathic physician, medical educator and retired military officer who formerly served in the Ohio House of Representatives from 2011-2018 representing the 89th and then 90th House districts.

“I appreciate the interest and experience of all the candidates we met with, and each brings a unique understanding of the issues important to southern Ohio,” said Obhof. “I’m confident Terry will represent the people of the 14th Senate District well. His life’s work has been helping Ohioans overcome challenges and achieve their potential, whether that’s in a doctor’s office, on a battlefield or in a classroom, and we look forward to working with him in the Senate.”

“It is an honor to be selected as the next senator for Ohio’s 14th Senate District. Serving others is one of the great joys of my life, and I’m looking forward to getting to work once again in the legislature for the people of southern Ohio,” said Johnson. “It is my sincere hope to make the 14th District an even stronger and more prosperous place to live, work and raise our families.”

Johnson is presently employed by Valley View Health Centers in Waverly, Ohio as Director of Medically Assisted Treatment and Integrated Health Services. He works directly with addicted people, particularly those afflicted with opiate and alcohol addiction. While serving in the Ohio House, he drew on his experiences as both a doctor and coroner to champion important health-related legislation to fight prescription drug abuse and help people safely dispose of unused medications. House Bill 93, which he sponsored in the 129th General Assembly, has been recognized as instrumental in shutting down Ohio’s “pill mills” and preventing prescription drug abuse.

Prior to joining the legislature, Johnson served as Scioto County Coroner for 10 years. He is also a veteran of the Ohio Army National Guard and served multiple tours overseas as a senior flight surgeon. He has received numerous awards and honors, including the Ohio Osteopathic Association’s Distinguished Service Award in 2018, the organization’s highest honor.

The full Republican caucus will meet this month to vote on the screening committee’s recommendation.