(January 2017) The idea for a family-wide strategic plan was born several years ago when OOA Executive Director Jon F. Wills and Ohio University Heritage College of Osteopathic Medicine (OU-HCOM) Executive Dean Kenneth H. Johnson, DO, were on their monthly conference call. Ohio was facing the daunting tasks of opening two new campuses in Cleveland and Dublin, possible restructuring of the Centers for Osteopathic Research and Education (CORE) to facilitate ACGME accreditation, providing preceptors and postdoctoral training opportunities for an expanding student enrollment and preparing for leadership changes at OOA and partner organizations. The OOA, OU-HCOM and CORE executive committees met in November 2013 to begin the visioning process. Eventually a professional facilitator was retained to move the process forward. And late last year, the OOA Board of Trustees adopted a new strategic vision and mission for osteopathic medicine in Ohio.

“The timing was right,” said OOA President Geraldine N. Urse, DO. “We really needed to put together a roadmap for the future,” she said. “Particularly because Jon Wills is preparing to retire this year. Now we can say to the next executive director, ‘here’s the direction we want to go, help us get there.’” 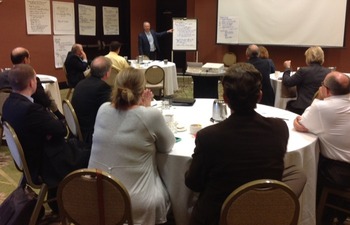 With the help of facilitator Josh Mintz, of Cavanaugh Hagan Pierson & Mintz, a management consulting firm in Washington, DC, the process included one-on-one interviews with key informants, an online survey, focus groups, and a final summit with leaders from the OOA, OU-HCOM, CORE, and Osteopathic Heritage Foundations. Strategic Summit Recommendations

That was followed by the survey sent to 4,000 individuals in the OOA database, including members, non-members, students, residents, medical educators, and hospital administrators. Designed to obtain input from a broad cross-section of the osteopathic medical community, it netted a response rate of approximately 10 percent, which is consistent with the average 10-15 percent response rate for external surveys (e.g., member/customer surveys), making it statistically valid. Survey Report

Urse said some general themes regarding opportunities and challenges emerged from the survey:

As a final step in data collection, three separate focus groups were held, each with distinct participants: OOA board members, osteopathic medical students, and representatives from the graduate medical education community including staff from Lake Erie College of Osteopathic Medicine and AT Still University. Focus Group Report

“How the OOA navigates this issue is more than a matter of semantics,” said Urse. “It influences so many areas of the OOA: our mission, what types of programs and services we offer, our definition of membership.”

Regarding the latter, there was a high level of support across all three focus groups to consider opening membership in OOA to MDs who have trained in osteopathically-recognized residency programs. A majority of participants also supported opening membership to any MD who wants to be connected to the osteopathic community.

Urse said the student focus group was also insightful. “They shared why they thought their peers lose their osteopathic identify over time,” she said. “How the OOA can address and respond to that situation will only help and strengthen our profession in the long run.”

Participants agreed that with the transition to the single accreditation system it could be difficult to build strong connections with graduates once they enter residency, particularly those DOs who don’t enter osteopathically-recognized programs. It’s important for the OOA to demonstrate value and relevance to students throughout their four years of medical school to keep them as members during residency and beyond.

One focus group participant, noting that younger DOs are the future of the profession and comprise the largest segment of osteopathic physicians, said: “If we cannot engage this cohort of DOs, there is no long-term future for the profession.”

All of the data from the interviews, survey, and focus groups was used to frame the discussion at the final Strategy Summit, held May 12-13, 2016, in Columbus, where the new vision, mission, and strategic framework were drafted.

Urse said while the Summit agenda focused on the OOA’s role, participants also recognized that the osteopathic community in Ohio functions as a system. “When envisioning the future, we needed to consider the roles and contributions of the entire system—not just the OOA,” she said.

With that in mind, the Summit focused on five key questions:

She explained that much of the discussion centered on the “quadruple aim.” Most physicians are familiar with the “triple aim” with its three objectives to optimize health system performance: by enhancing patient experience, improving population health, and reducing costs. The quadruple aim adds the goal of improving the work life of health care providers, including clinicians and staff. The addition recognizes that physicians and others on the health care team report widespread burnout and dissatisfaction—which often leads to lower patient satisfaction and reduced health outcomes.

All of the strategic planning partners agree that reaching the vision is not the work of the OOA alone. Achieving improved health outcomes for all Ohioans will require cooperation among many, including the osteopathic organizations in Ohio.